Facebook API Error: {"error":{"message":"The user must be an administrator, editor, or moderator of the page in order to impersonate it. If the page business requires Two Factor Authentication, the user also needs to enable Two Factor Authentication.","type":"OAuthException","code":190,"error_subcode":492,"fbtrace_id":"ATf84QGx6TfNfc23756Djpa"}}
Reconnecting to Facebook may fix the issue.

Products and advice for tackling the toughest parts of the job

As a professional painter with nearly 20 years of experience, I’ve developed a thriving business. Getting there hasn’t been easy, though, and I’ve made my share of mistakes. However, I’ve used these mistakes to improve my technique and to seek out high-quality, problem-solving products that I now rely on for almost every job. Here, I’ll share some of my favorite products and some tips for getting the best possible exterior paint job.

The 2200-sq.-ft. house featured here was in rough shape when we started, and it demonstrated that it’s best not to neglect exterior painting for too long. Regular maintenance could have prevented much of the prep work and saved thousands of dollars when it came time to repaint. Because of the home’s condition, we had between four and eight painters on the job for nearly two months, which pushed the clients’ bill to more than $30,000. The price included removing the existing vinyl shutters; pressure-washing the entire house; scraping, priming, and painting all the trim and overhangs; stripping much of the siding down to bare wood; and painting the porches, siding, and window sashes. Finally, we painted and hung new, historically accurate wooden shutters.

In April 2008, the EPA released new rules for painting and remodeling houses that have lead-based paint. If you’re a contractor and you’re caught ignoring the EPA’s RRP (renovation, repair, and painting) rule, you’re risking your livelihood. One Connecticut-based company was recently fined more than $30,000 for violations. Homeowners doing their own work are exempt, but that doesn’t mean they should disregard the requirements. If you’re a homeowner planning to repaint your own house, I suggest reading up or taking a class on handling lead-based paint.

Tip 1: Scrape and sand before washing 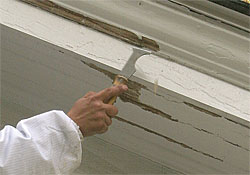 When there is a lot of scraping and sanding to do, as there was on the house featured here, we like to do it before the house is washed. Many painters make the mistake of washing first and then doing a lot of heavy sanding afterward. The dust left behind makes it hard for the paint to bond. After the scraping and sanding are done and the house has been washed, check all scraped areas to make sure the washing didn’t loosen any more paint. 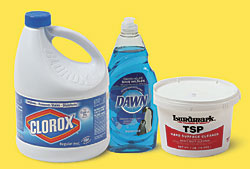 We add about a tablespoon of dish soap to our mix of TSP (trisodium phosphate) and bleach. Dish soap creates suds that help the solution to cling to the siding and trim instead of running off the house. Then we rinse the house with a pressure washer on a low setting. Never use high pressure, which can force water into the wood and damage siding and windows. 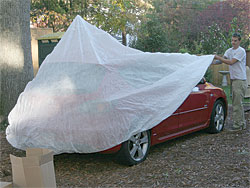 We use lightweight canvas drop cloths to cover plants. They don’t break branches, and they let the plants breathe. Plastic covers can heat up like a greenhouse and kill plants. We cover lights, windows, and doors with Cling Cover plastic. Unlike with traditional poly sheeting, tape sticks well to the lightly textured surface. This material comes in 9-ft. by 400-ft. rolls. Automobile covers are one of those touches that show our clients we do quality work and care about their possessions. We buy them from Sherwin-Williams, and they cost about $35. 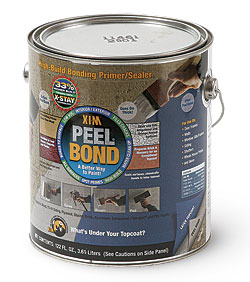 If we are working on a house that has old oil-based paint that is peeling and cracking badly and complete removal is not an option, we like to use XIM Peel Bond primer. It’s a high-build, clear acrylic primer that can be applied up to 30 mils thick. It’s great at leveling cracked surfaces, and it costs two-thirds less than stripping down to bare wood. We used this product on the porch ceilings and on the second story of the house shown here as a way to make the project more affordable. We stripped the lower part of the house down to bare wood so that it would have a flawless finish at eye level.

Tip 5: The right tool makes all the difference 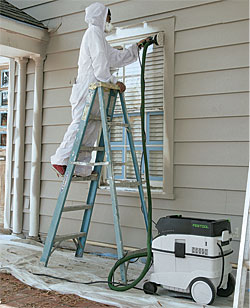 With the EPA’s new RRP rule for dealing with lead-based paint in effect, we had to rethink how to prepare surfaces that test positive for lead. When we were introduced to the Festool sander/vacuum combo by a local cabinet builder, I was really impressed, but I was hesitant to buy one because of the price (nearly $1200). The tool works so effectively, though, that after we bit the bullet on the first one, we ordered two more soon after. Now we use all three every day on lead jobs. The vac’s EPA-approved HEPA filter captures 99.97% of particles down to 0.3 microns. We love that these vacuums protect our employees from lead exposure and reduce our cleanup time. In fact, we like them so much that we plan to buy six more this year. 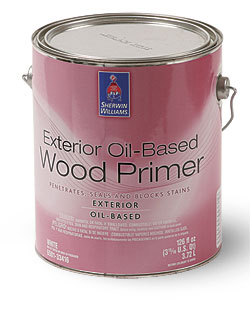 With so many primers out there, it’s easy to get confused about which one to use. We almost always use a slow-drying oil-based primer for exterior wood, such as Sherwin-Williams’ Exterior Oil-Based Wood Primer. Because it dries slowly, it has time to penetrate the wood and provides the best base for all types of paint. Many people think that if they are going to use latex paint, then they must use latex primer, which is incorrect. As long as the primer has time to dry, it’s perfectly fine to topcoat with latex paint. For fiberglass and PVC trim that needs to be painted, we’ve had good success with Sherwin-Williams’ Adhesion Primer. One often-overlooked step is to wipe these materials with denatured alcohol to remove any manufacturing oils before priming. When priming new wood, watch out for mill glaze. I’ve heard carpenters and painters say they don’t believe in mill glaze, but if the wood appears shiny or especially smooth or if it’s been in the sun for a few weeks, sand it lightly before priming. For more on primers, see “What’s the Difference?”from Fine Homebuilding #226. 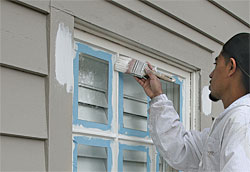 When painting old windows, it’s best to remove loose glazing putty and peeling paint and then re-glaze where needed. It’s OK to leave portions of old glazing putty if they’re well adhered. Once the glazing putty is dry (we like to wait two to three weeks), we mask the perimeter of the window with 1-1⁄2-in.-wide blue tape, which protects the glass from scratches and speeds up priming and painting. After masking, we sand all the wood and old glazing, then wash the window with a solution of TSP, bleach, and detergent. We let it sit for 10 to 15 minutes, then rinse the window with clear water. After the window is dry, we prime the sash and glazing putty with a slow-drying oil-based primer. Once the primer is dry, we sand the wood lightly, caulk where needed, and apply the first coat of paint. Then we pull off the tape and clean the glass with spray-on glass cleaner and paper towels. For the final coat, we lap the paint 1⁄16-in. onto the glass. This prevents water from getting behind the glazing putty, which is what causes the putty to fail. Before the paint dries, we open and close the window a few times to prevent it from becoming sealed shut with paint.

Tip 8: Wrap up painting by early afternoon in the fall and spring 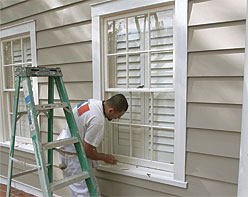 Surfactant leaching is something that most people haven’t heard about but have probably seen. It occurs when ingredients in the paint leach to the surface as a result of moisture. It’s common in the fall and spring with their warm days and cool nights. At night, condensation forms on the paint film; then the water breaks down the water-soluble components in the paint and brings them to the surface. When the water evaporates, it leaves behind a waxy-looking area that usually wears off on its own, but it’s hard to convince a customer of this. To prevent surfactant leaching, we stop painting around 1 p.m. in the spring and fall. We do surface prep in the early morning, paint from late morning to shortly after lunch, and then resume prep work until the end of the day. This process takes longer, but it avoids problems.